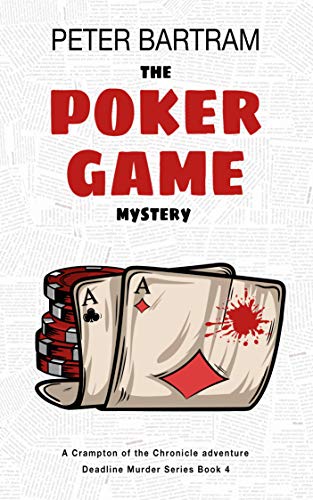 Poker is a game for the dead lucky…

Crime reporter Colin Crampton discovers nightclub bouncer Steve Telford murdered. Colin can’t understand why five cards of a poker hand are laid out next to the body.As Colin investigates, he becomes entangled with three former special forces soldiers from the Second World War. All have motives to kill Telford. But Colin’s probe is derailed when a shock change at the Evening Chronicle puts the paper’s – and Colin’s – future in peril.The tension ratchets higher when the life of a young girl is on the line. Colin is forced to go head-to-head in a poker game with sinister newspaper owner Quentin Pell to save her.There are laughs alongside the action as Colin and his feisty girlfriend Shirley shuffle the cards and play the most dangerous game of all – with their own lives at stake.

Peter Bartram brings years of experience as a journalist to his Crampton of the Chronicle crime mystery series. His novels are fast-paced and humorous – the action is matched by the laughs. The books feature a host of colourful characters as befits stories set in Brighton, one of Britain’s most trend-setting towns.

You can download Murder in Capital Letters, a free book in the series, for your Kindle from http://www.colincrampton.com.

Peter began his career as a reporter on a local weekly newspaper before editing newspapers and magazines in London, England and, finally, becoming freelance. He has done most things in journalism from door-stepping for quotes to writing serious editorials. He’s pursued stories in locations as diverse as 700-feet down a coal mine and a courtier’s chambers at Buckingham Palace. Peter is a member of the Society of Authors and the Crime Writers’ Association.

Colin Crampton, the hero of my Crampton of the Chronicle mysteries is a young newspaper reporter. When readers learn that I was once a young reporter, too, the first question they often ask me is: “Are you Colin?”

Well, obviously not. Or, in other words, probably.

Let me explain. I never had quite the adventures Colin experiences or got up to quite such outrageous scams to land my stories – although I had my moments – but there are certainly some similarities between us.

But that’s where the similarity ends. Colin is a crime reporter. I was a general reporter. I used to cover many different kinds of stories, but sometimes I did the police briefing each morning. That’s when the local cops tell journalists about anything significant that’s happened overnight. It’s usually an uneasy session when the journos try to weight up what the cops aren’t saying.

And I used to doze on the press benches in the courtroom as endless speeding drivers were fined five pounds. But coroner’s court duty was even worse. Dead boring!

Sometimes, readers ask why I set the Crampton series in the 1960s. One of the reasons was because Colin works on an evening newspaper and the Swinging Sixties was the high point of evening newspapers’ circulation success, before they declined in the face of competition from television news.

But one of the strongest reasons is that the lack of modern technology in those days made the job of producing newspapers that much tougher. We had no computers, no mobile phones, no internet, no Google. Newspaper type was set in molten lead.

When we had to file a story, we needed to find a phone box and dictate it over to a copytaker – a guy wearing headphones sitting at a typewriter. I’ve found that the lack of modern technology makes for so many more plot opportunities in the books.

But one thing never changes. The heart of newspaper life is the hunt for a good story. And in that respect, Colin and I were very much alike.

* The Poker Game Mystery is the fourth book in the Deadline Murder series of Crampton of the Chronicle adventures. Buy it at: http://getbook.at/tpgm

One thought on “The Poker Game mystery Guest Post”

A self-published author of epic and heroic fantasy