Warm Koskenkorva vodka scours the inside of his mouth, sets his throat ablaze. But he controls the sideways swerve, and the car comes out of the bend at almost the same speed as it went in.

He takes his right hand from the steering wheel, changes gear, glances at the speedometer. A shade over 130. For winter driving, this speed is excellent, especially in freezing conditions along a winding road across the eastern side of Hurmevaara. You also have to factor in that visibility is limited at this time of night – despite the brightness of the stars.

His left foot touches the clutch and his right presses down on the accelerator. He raises his left hand again and swallows a sliver from the bottle.

This is how you should drink Koskenkorva. First a big gulp to fill the mouth, so strong it lights up like a ball of fire and feels as though it could knock your teeth out. Then a smaller sip, a thin gauze of liquor that barely wets the lips but that’s enough to extinguish the fire and helps you to swallow the first proper mouthful.

And this is how you drive a car.

He arrives at a long, gentle downward slope, which slowly veers to the right, but so slowly and smoothly that the curve is deceptive. At first it looks as though all you need to do is keep the car straight and your foot on the gas, pedal to the metal. But no. The road then slopes slightly to the left, and the faster you drive the more it feels as though the road wants to buck the car from its back. He grips the steering wheel; he knows he’s going about 165 kilometres an hour. It’s the speed of champions. He knows that too, and the knowledge hurts.

On his right he catches a brief glimpse of the ice stretching across Lake Hurmevaara. Fishermen’s flags jut out from the surface, marking their fishing holes and nets. He sometimes looks at these flags when he takes this route, because glanced at quickly they almost seem like rows of cheering crowds. But tonight he doesn’t need applause.

He keeps the steering wheel angled a fraction to the right to correct the slope of the road surface. As another bend comes into view up ahead, he begins an engine brake. This requires the utmost coordination of hands and feet, the seamless collaboration of clutch and gearstick. He sets the bottle firmly between his thighs, casts his left hand up to the steering wheel, moves the right down to the gearstick, presses down on the clutch and with the accelerator gives just enough gas. He controls the car by harnessing its own power. The brake pedal is for amateurs – guys like the one who’d lent him this car.

After a short, even stretch of road, the car arrives at the foot of a hill with two ridges. He can feel the burning at the bottom of his stomach.

This isn’t the Koskenkorva. This is fate.

He uses all the power the car can muster. It requires the utmost control of both the Audi and the situation. You can’t just put your foot on the gas. If you do that, the vehicle will be impossible to steer. And at a speed of over 180 km/h, that means careering into the heaps of snow along the road’s verges and after that the car would spin on its roof a couple of times – if you’re lucky. If you’re not and you hesitate even slightly, the car will plough right into the thick spruce forest, where it would twist itself like a gift wrapper round a frosted, metre-thick tree trunk.

He doesn’t believe in luck. He believes in speed, sufficient speed. Especially now, as everything is approaching its conclusion. A conclusion that suits him fine.

The Audi reaches the top of the hill travelling at around 200 km/h. And when it gets there the car launches into flight. As it takes off, he raises the bottle to his lips. This requires as much precision as driving. His left hand is firm but relaxed. Cold Koskenkorva floods his mouth as the car flies through the frozen night. Sweet flames tingle across his lips as one and a half tonnes of steel, aluminium, roaring engine and new studded tyres obey his command.

The Audi flies far and long. It touches down at the very moment the bottle returns to its rightful place between the driver’s thighs.

He slips down to a lower gear, accelerates, changes gear again. A downhill slope, a tiny stretch of flat ground, then another hill. And another flight. He catches a glimpse of the flashing red dials on the dashboard and the glinting bottle. The speedometer shows 200, the bottle contains only a few more gulps. When the studs of his tyres once again strike the surface of the road like machine-gun fire, he smiles – as much as a face gnawed with booze possibly can.

He is in his element. Those who turned their backs on him will live to regret it. He’s been shunned, ostracised, taken for a fool. He might die, but by dying on his own terms he will rise above everything and everybody. He will achieve something, pass them by, waving to the slower cars as he goes. The thought is a potent one, strong and warm. It burns his mind like the liquor in his mouth.

He slurps from the bottle until it is empty.

He opens the window. His face freezes, his eyes stream. He throws the bottle out into the snow.

An open stretch of road. At the end of it, a T-junction. He is not turning either way. He is heading right for the rockface in front of him.

Maximum speed always depends on the driver. People never talk about this. They just say, such-and-such a car’s top speed is this or that. Nonsense.

He looks at the road ahead. The last kilometre. Ever.

This is how it’s all going to end, he thinks as the car explodes.

He can feel the explosion around him.

What he sees in that split second: the world is engulfed by a huge flash of light, followed by a shadow just as immense; light and shadow both arriving vertically from above. His heart stops and starts again, now throbbing in heavy, hollow beats, like hammer blows against metal. His senses, all five of them, seem to sharpen and come into focus in a way he has never experienced before. He can smell the tear in the car roof, taste the strange, pliable material inside the seat, feel the pressure wave push against his hands. At first he can hear everything, then, as his ears become blocked, he hears the explosion continue inside his head.

He acts instinctively. He shifts to a lower gear, slams his foot on the clutch, the accelerator and the brake. Engine brake, hand brake – a controlled spin. The car slides into the intersection and comes to a stop.

He isn’t quite sure how long the moment of stasis lasts. Maybe a minute, maybe two. He cannot move. When his faculties finally return and he manages to release his grip on the steering wheel and focus his eyes on what is around him, he has no idea what he is looking at.

Of course, he understands the fact that right above the passenger seat there is now a gaping hole in the car’s roof. But there’s a hole in the seat too. The diameter of the hole in the roof is slightly smaller. He congratulates himself on the liquor. Without that in his system, it would be impossible to remain this calm.

He manages to unclip his seatbelt, then stops for a moment. It seems necessary to go through the facts again. The hole in the roof, the hole in the seat, himself. The holes are right next to him.

He steps out of the car and looks up and down a few times. Endless banks of snow, the frozen night lit only by the bright light of the moon and stars. The snow crunches beneath his driving boots as he paces around the car. The hole in the roof is like a pair of lips set in an inside-out pout. He opens the passenger door. Yes, the pouting lips are kissing the inside of the car. The hole in the seat opens inwards; it looks almost lewd. He peers into the hole. It is black. He deduces two things. There can’t be a hole in the bottom of the car; if there were, he’d be able to see snow. Whatever made that hole passed first through the roof, then the seat – then stopped.

He backs away from the car. The snow crackles. His heart is racing.

He was preparing himself to die. Then something happened, and he’s still alive.

He looks up like a shot. Of course, he can’t see anything. You can rarely see anything in the sky. With the exception of stars and the moon, and, in a few months’ time, the sun. Clouds. Aeroplanes. But not…

He’s a common-sense kind of guy. There’s no such thing as UFOs.

Then he remembers. It was a TV show. The documentary said it’s only a matter of time before a comet will strike the Earth. When that happens, it will cause a new Ice Age, because the dust that will be thrown up into the atmosphere will be enough to block out the sun. Everything will die.

Except for him, it seems.

Even so, it’s hard to imagine that someone sitting only half a metre west of the impact might survive while everybody further away perishes. Though there are no immediate signs of life, he is convinced that, somewhere in the village of Hurmevaara, someone is tucking in to a cold-meat sandwich right this minute.

But it has to be something along those lines. He can’t remember the word. And it’s cold now. Neither the liquor nor the thought of death seem to warm him any longer.

His phone should be in the zipped breast pocket of his jumpsuit, but it isn’t there. He set out to die, not to make telephone calls. All of a sudden the full force of his inebriation hits him.

Where is the nearest house?

It’s three kilometres away. But that’s one house to which he will never return. The next one is a kilometre further.

He sets off on foot. After walking a few hundred metres, he comes to a halt. He digs his hands into the snow, washes his face. It feels necessary. The snow-rinse aches, freezes his fingers, numbs his face. But it cleanses him, purifies him in some important way. He takes another few steps, then stops again.

He turns, looks first at the car, then up at the sky.

Well if that doesn’t have you chomping at the bits to read this book then I don’t know what  will. (wish I done the blog tour now) 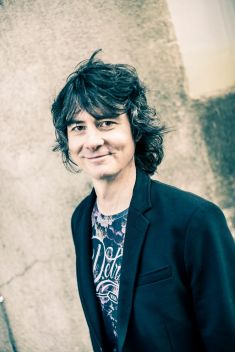 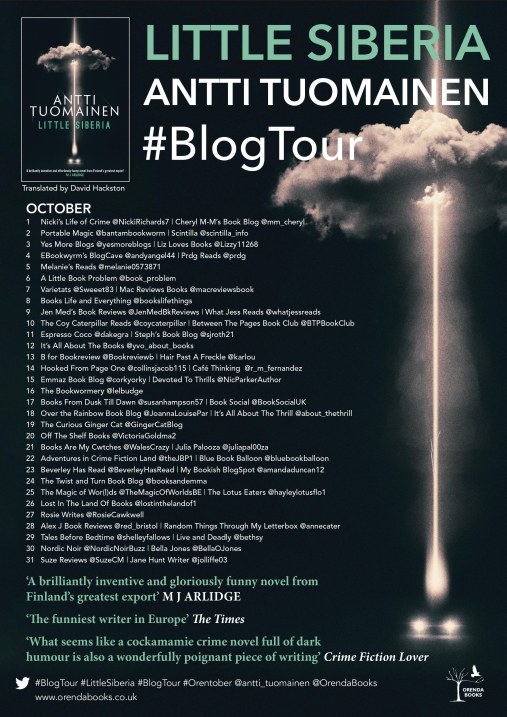 For the love of words…